I have the good fortune to have a great day job with my office in a nice little park. The Santa Cruz Mission State Historic Park contains one of the original mission buildings from the 1800's.

The adobe structure is constructed from bricks, made primarily from mud and straw, and stands as a reminder of the past. The Santa Cruz Mission  was established in 1791 and built between the years of 1822 and 1824, mostly by the hard work of Native Americans in what was then known as “Alta California.” These Native Americans were the main residents in what is now Santa Cruz County’s oldest building. The lovely, single-story adobe has been restored to its original appearance.

Surprisingly, this little treasure is not well known, even among long time Santa Cruz residents.

There is a move to change all of that. Friends of Santa Cruz State Parks in cooperation with California State Parks has set out to let people know about this hidden gem of a park which is very close to downtown and has a great view out over the whole area from it's vantage point on a hill.

This summer, there will be a series of events to draw visitors. 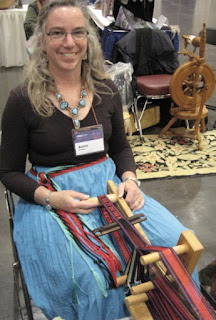 Santa Cruz has a very popular First Friday Art Tour, and the Mission is the newest venue to take part in this tour. On Friday, June 7th, I will be the featured artist. I'll be there weaving and a portion of my sales will go to Friends of Santa Cruz State Parks to help support all the parks in coastal SC County which it serves.

For more info about the First Friday event on June 7th, click here.