A while back, I wrote about my first inspiration and experiment with using cassette tape in my weaving.
(Re-read that post here if you like.)
Since then, I have done some more experimenting. On the first ones, I just used the cassette tape as warp and tried some bright colors of nylon as weft. The resulting fabric, while interesting, was not especially useful. 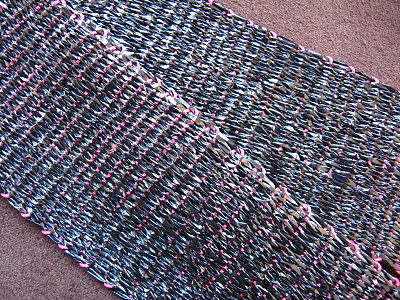 When asked to make a guitar strap, I said it would not be strong enough, but then I decided to add a strand of cotton along with the tape. Better fabric. The guitar strap was made and sent out to the customer for use and testing. The reviews were good. 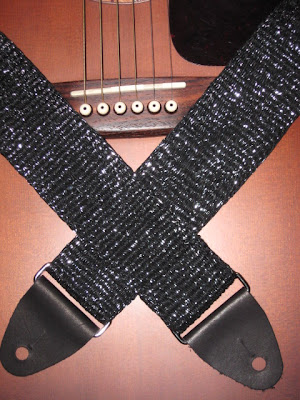 Recently, I decided to take that a little further and use a heavier black cotton with the black tape and to put a pattern into it, as I would normally do with a guitar strap. I had this lovely, shiny deep red yarn that I thought was a nice complement. 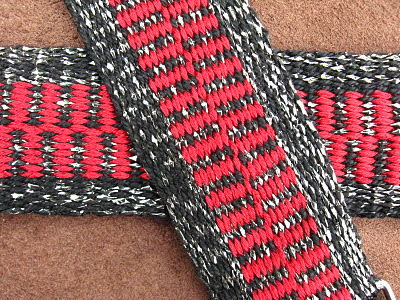 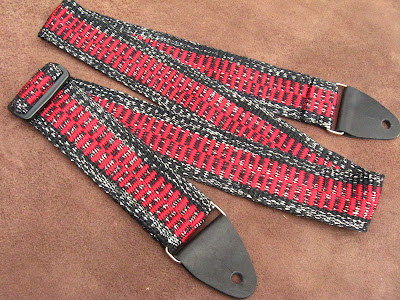 Then, yesterday I wore a sash which I bought in Guatemala that has mylar strands in it. Hmmm...

This reminded me of the tape, so I tried something new. I put a single stripe of cassette tape in amongst the other colors in the pattern just for a shiny accent.  This is a strap for my new camera case. The pattern did not come out as planned. I was setting up my loom and cooking dinner at the same time, so not paying attention.

The colors did not end up in the symmetrical pattern which I had intended. AND, you can't really even see the cassette tape. I'll have to use more next time.   The strap will be perfectly functional for my trip to New Mexico and I will probably make another one in the future.