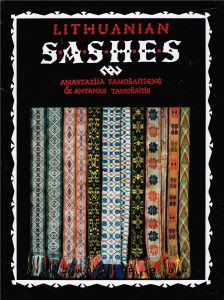 If you have been following my blog, you will undoubtedly know, that it was this book which led to my discovery of three-color pickup. It has been out of print for decades. Recently, several unopened boxes were discovered in storage, providing a new opportunity to buy a copy of this precious resource from the organization which published it, the Lithuanian Folk Art Institute of Toronto, Canada.

It is available here: https://ltfai.org/lithuanian-sashes-book/  They will be offering it at a special discount price from Nov 9 to Dec 6.   EDIT: It appears to be sold out as of today, Dec. 6th.

This is an amazing and exciting book that is valuable both as a look back into history, as well as a new source of inspiration to anyone currently weaving!

While ethnographic references such as this one are most likely to be found in the native language of the country, this one is written in English.

In preparation for the book, the authors examined several thousand ancient sashes. About one thousand of these have been reproduced in the book. Many of them are in full-color illustrations- photos, sketches, and graphic patterns.

The first part, Traditions of Lithuanian Sashes, is a great resource to anyone interested in folk art, weaving, textiles, or Lithuanian culture and tradition. It outlines the history, uses, and cultural significance associated with various kinds of sashes. Regional differences and similarities are mentioned. A detailed map allows the reader to locate villages and regions.

The second part, Traditional Lithuanian Techniques for Making Sashes, illustrates tools, materials, and techniques. The wide variety of techniques is surprising. They include: plain warp-faced weaving, rep weave, pickup, weft-faced, twill, finger weaving, braiding, plaiting, inlaid, overlaid, tablet weaving, overshot, sprang, knitting, and crochet. It is not a detailed and in-depth how-to, but some threading drafts are given for different types of woven bands.

The authors bring to life the culture through stories such as this: “Farmers would bring grain to a mill in colourful, striped sacks which they would immediately recognize upon their return to pick up the flour. Those who did not have such distinctively coloured sacks would tie a colorful patterned sash around their sacks”. They also share verses from folk songs and poetry, some of which are shown as inscriptions woven into bands.

The 6-page glossary is very informative and the index helps the reader to easily find what they are interested in.

My discovery of the three-color pickup was super exciting as I had never seen it used before in warp-faced bands. Several bands are illustrated in photos and described in this way: “Sashes woven with three-coloured motifs were usually woven from handspun wool yarn by the women of the province of Zanavykija. Only three percent of sashes was woven with three-coloured motifs because only the rare weaver had the skill to weave them.”

Maybe you will discover something new in this book, too!

Published by the Lithuanian Folk Art Institute and available online at: LTFAI.org

To learn more about my book, Three-Color Pickup for Inkle Weavers, Click the link below. 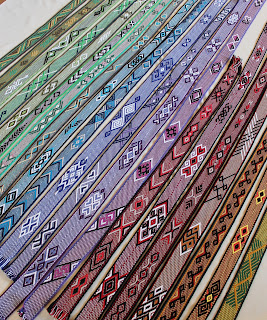