Doing Some Baltic Pickup and Looking at Charts (Part One)

I was really looking forward to a series of workshops that I was scheduled to teach in California early this year and had fun preparing for them. Before the Corona Virus Pandemic hit and shut down our social interaction, I happily got to complete the first two workshops in San Diego and Exeter. We did Baltic-style pickup in both places. The charts for this technique were hard for me to wrap my head around in the beginning, so I though I'd share some things that helped me.

Here are two that I just finished. They are similar, but slightly different zig zag designs which use 9 pattern threads. These designs require picking only, no dropping.  Many Baltic pickup designs require that you pick AND drop some threads out of their normal sequence.
But, simpler designs like these are a nice way to ease into the technique. My next blog post will have pick and drop versions of Band A. 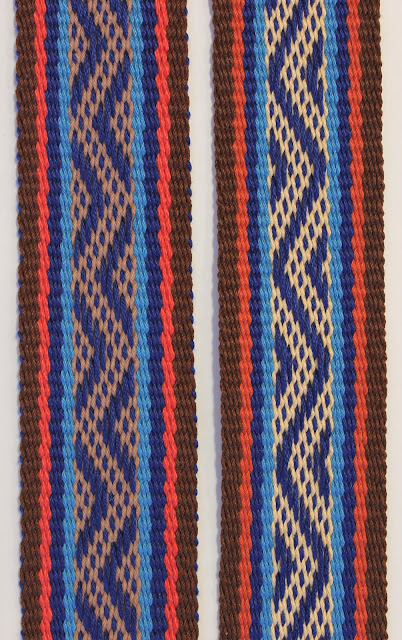 Once again, I am SO grateful to Jeff Bigot for making a tool for creating inkle weaving drafts.
It's FREE and I encourage you to play with it to create your own designs.
Here's the link to Version2 where I created the warping and pattern drafts below: http://www.raktres.net/seizenn/v2/editor.html

The Pattern Editor is a great help to me in planning the warping of my loom, as I need to be sure that I have the right number of threads to get the 2" width I want. Once I know how many pattern and background threads I need in the central area, I can choose a plain weave pattern for the borders. In this case, I chose thick stripes in chocolate, rust, turquoise blue and royal blue.
Looking at Band A  there are:
75 threads altogether.
46 border threads (23 on each side)
20  tan background threads in the central pattern area.
9  royal blue pattern threads: 4 in the heddled row and 5 in the open row.
Because of this offset alignment of the pattern threads, diagonal designs are formed easily.
Diamonds, chevrons and zig-zag patterns are some of the easiest to understand and weave.
In traditional Baltic woven patterns, the motifs are often much more complex.

Reading the Pattern Drafts Below
The pattern draft for weaving the design is quite a different type of chart than the warping draft. Baltic pattern drafts are typically shown as a grid, like graph paper. The border threads are not shown.
In looking at the drafts below the blue squares represent the pattern threads. The white squares are just place holders, creating visual space. Don't mistake them for background threads; the background threads are not represented on the pattern chart at all.
The columns on the chart are numbered 1-9 , starting at the left.  One column = one pattern thread.

The lower portion of the two drafts looks like a checkerboard. This shows the position of the pattern threads as they naturally appear when woven in plain weave.
To read the draft, you start at the bottom, this is the row closest to you as you start to weave. Then you work your way up the chart watching your design grow up from the bottom as you weave. 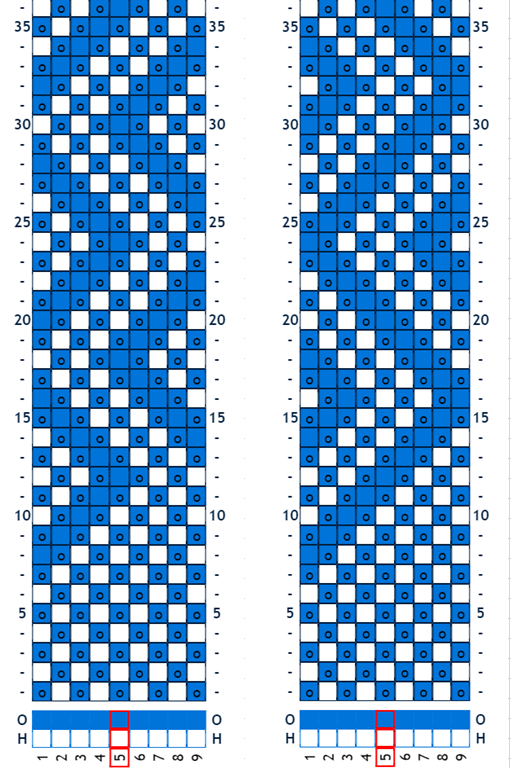 Rows 1-7 on the chart for Band A show, simply, plain weave and it looks like the checkerboard.
The variation from the checkerboard starts at row 8 and indicates where you have to manipulate threads to get your pickup design. Everywhere that you see a vertical stack of 3 colored squares, it illustrates where the pattern thread is floating across a row, out of it's normal sequence. Most picked threads will float across 3 rows. In the first row, they appear naturally on the surface of your weaving. In the second row, you have to reach down and pick them up, adding them to the top layer. In the third row, they are naturally on top again. Band A and B  have diagonal lines which turn at the edge to change direction. At the point where a line turns, it will be necessary to pick up a thread which has just been picked up, causing it to float across 5 rows instead of 3.

Visualizing the pattern by looking at the areas where the checkerboard is altered is one way to weave the design. Can you follow the zig-zags visually and pick up the correct threads to mimic the charted design? This has been my habit, although it is not the only way. Nor, the most common way.

Most sources recommend reading the chart one row at a time. Start at the left. Is the colored square in column 1 blue or white? If blue, pattern thread #1 needs to be showing on top of your band. If the square is white, the pattern thread on that row should not be showing. In Band A, the need to pick up threads begins in row 8. Column 1 shows a blue square, so that one needs to be picked up. All of the rest of the threads in that row are following the regular checkerboard sequence, so no need to do anything here. Continue, row by row, checking for colored squares that don't follow the checkerboard pattern. Lift warp threads as necessary.

The sequence, row by row, for Band A is this: 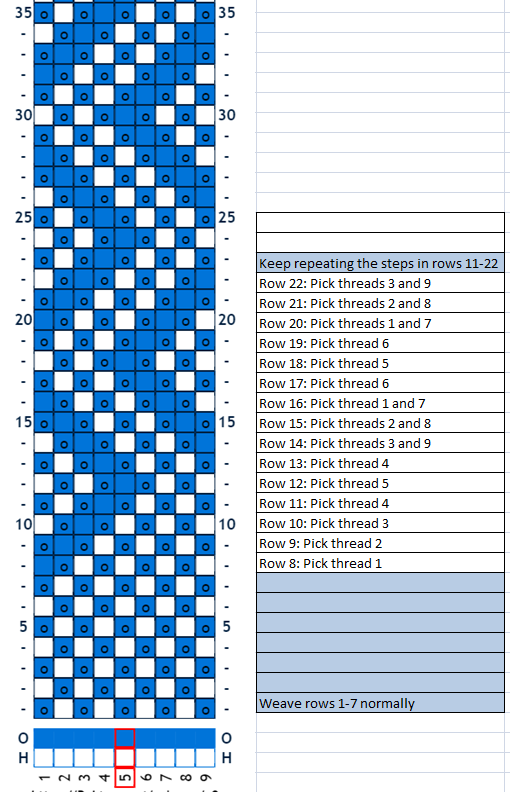 Continue here with Part 2: http://aspinnerweaver.blogspot.com/2020/04/baltic-pickup-part-two.html
Please leave a comment to let me know what you found helpful in this post and what you think needs clarification. This will be the first in a short series.

For more information, check out these resources:
Susan Foulkes writes a very interesting blog here with many bandweaving tips:
https://durhamweaver64.blogspot.com/p/band-weaving-with-11-pattern-threads.html

For two patterns from this blog that also use pick-only designs (with no dropping) :
http://aspinnerweaver.blogspot.com/2015/04/two-pickup-patterns.html