Since I am working on writing my own inkle weaving ebook, I decided to review my collection
of inkle books and see what has already been said and done.  I started weaving in the 1970's and
still have a number of my books from that era. Surprisingly, there were a lot published  in that decade and not many new ones until this decade. It was SO  much fun to thumb through all of these! Each one has some wonderful stuff in it. As I looked, I noted the different terminology and types of drafts used by the authors. Now I know why I call things by the names that I do. Some patterns were named by the authors of these vintage books and those names have stuck with me although other terminology  is in common use nowadays.The method of pickup which is known by many names like: Sami,  Baltic, European, Basketweave and Supplementary Warp, has always been known to me as "Speckled Background" thanks to Evelyn Neher. 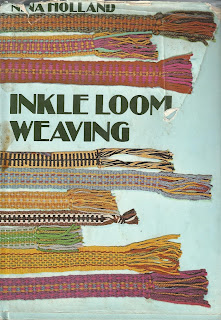 This was my very first inkle book and the one which provided the plans used by my dad and I to build my very first loom back in 1976. Unfortunately, the tensioner on this loom was not the best. The book, published in 1973, is easy to find for sale online at about the same price as it was new. It is full of project ideas, many of which reflect the time period, but some of which would be timely still.
Just look at the photo below of that dapper gentleman in a handwoven necktie!
Don't you just want to make one for a man in your life? 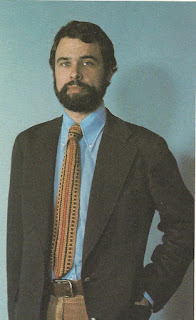 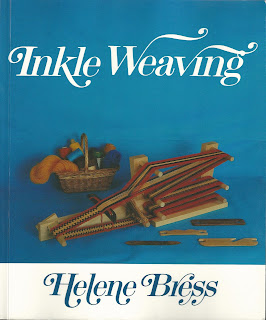 Helene Bress's book, originally published in 1975,was updated in 1990.
If you can only buy one book, buy this one!  It is still available!
It has plans for building looms and I have a large floor standing inkle loom built from the plans.
Very sturdy! The how-to section is great for those starting out. It has good directions
for pickup techniques, brocades, finishes and many project ideas.
Also, a handy chart is included with specific yarn types and approximate warps per inch. 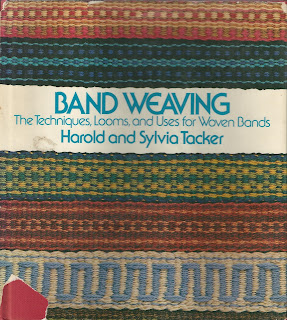 "Band Weaving", published in 1974, demonstrates so many techniques: Weaving on an inkle loom, soda straw loom, Hungarian loom, twining loom, as well as finger weaving, backstrap weaving with a rigid heddle and card weaving.  It provides an interesting comparison of techniques! 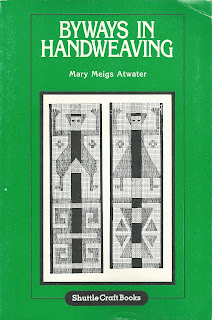 Mary Meigs Atwater, a weaving legend, did much to promote the craft in the USA in the first decades of the 20th century. She is credited for importing the first inkle loom to this country from England and encouraging it's manufacture here. This book, "Byways in Handweaving", first printed in 1954, is fascinating. Not only does she discuss various methods of weaving narrow wares, but gives patterns and instructions for weaving bands from Estonia, Peru, Guatemala, Africa, Scandanavia, Bolivia, Egypt, and several Native American tribes.
I only wish that they were in color! 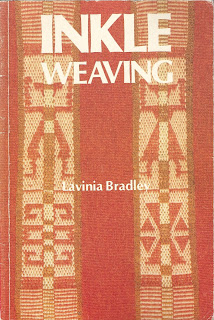 Published in 1982, this book has a bit of everything from building a loom, warping, pickups and project ideas. My favorite project is making your own "Moccasin Slippers", although I confess that I haven't tried it. It is the place where I first learned to weave letters even though I have since discovered a method which I prefer over this one. 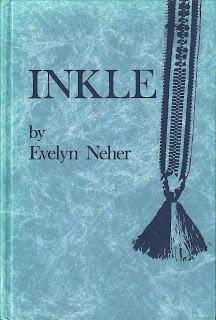 Evelyn Neher's book, "Inkle", published in 1974, includes a segment on tapestry weave, not usually discussed in inkle weaving  books. The section on looms, historical and modern, is wonderful!! Check out that picture below of a Polish weaver. She has her warp tensioned between one knee and the opposite foot. (If you click on the photo, it becomes larger.) 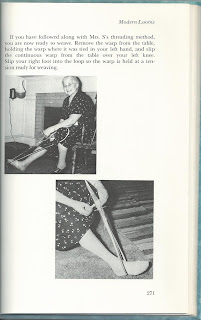 Although there are a few other books in my band weaving library, the above ones have been the most influential in my inkle weaving career. 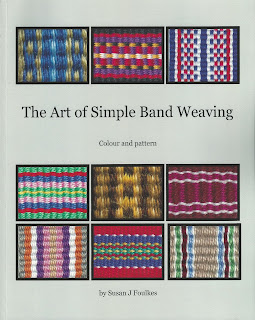 Susan Foulkes is best known for her book "Sami Band Weaving",  which I also have.
This little book, "The Art of Simple Band Weaving", published in 2013,specifically illustrates the designing of plain weave bands, and is one of the best books currently in print for that purpose,
in my opinion.
Susan is an excellent teacher and has several nice YouTube videos, including one which was  made as a companion to this book. https://www.youtube.com/watch?v=ZzhuDomPtxE
In this video, she demonstrates how to weave a band using 5 different loom types.