Last year, I was contacted by a buyer for a very famous circus asking if I could replicate a belt for one of their costumes. I did. They liked it. This year, I was asked to make 2 more because this is a long-running show in Las Vegas. So I did. When I asked, I was told that I could not use their name when showing this online. Maybe one day, I'll make it to Las Vegas and see my belt perform! 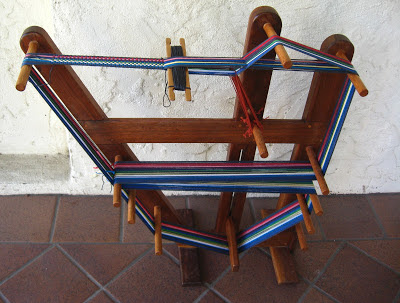 By using the big loom, I was able to weave the two belts on one warp. 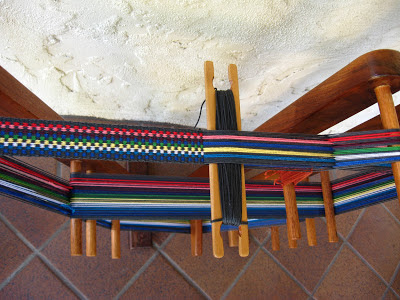 It has a lot of colors, ones which I probably would not have put together, and not in that order.
This is the beauty of doing custom work! Someone else's color ideas can be fun!
The original belt used a very different weave structure. After thinking about it for a while, I realized that the buyer was not really interested in HOW it was made, they just wanted it to have the same look. I was able to satisfy their need with this plain weave version.

I liked the way the original belt was finished with the thick braids and wrapped ends.
It was fun to do them this way, as it is different than my usual finishing methods.