Thanks for all who joined in the brainstorm session for a new name. There are so  many things to take into consideration and it was really hard! In the end, I chose "Weaver Guitar Straps" so it is still tied to "A. Spinner, Weaver" but has it's own identity which I think will be much easier to remember for the target market, guitar players. After all look at the names of some of the great guitar companies: Fender, Martin, Gibson all simple, strong two syllable names. A friend pointed this out, and the idea stuck with me. 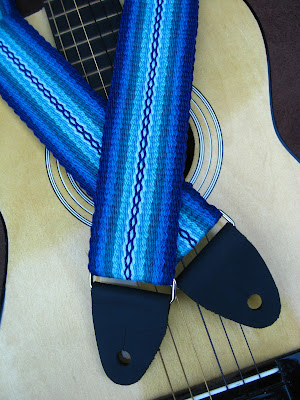 Although I am super-excited about the branding work and logo that Jon and Julie at Nombat are doing for me, we are still working on some details so I'm not yet ready to reveal it. Julie did a fantastic job on the logo!
I'm sort of fussy about the colors, though. Surprised? (No? I didn't think so.) Thanks J & J! 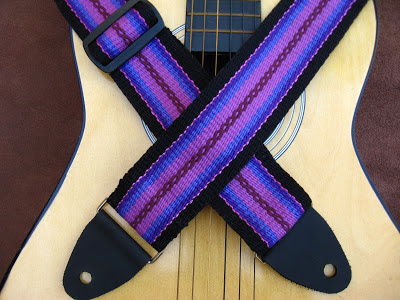 Yesterday, I went to see Jon and Julie at a local craft fair and was happy to see that they were set up right in front of  The Guitar Shop, so I went inside. The owner, Steve Crisp was very interesting to talk to. He's been in the music business for over 30 years, building, repairing and playing guitars since 1973. It was great to hear from a professional, what makes a good guitar strap; he showed me several of his straps and made some great suggestions which I hope to be able to put into action. Thanks, Steve! 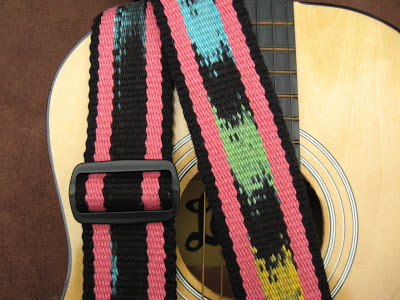 This past week, I've made official my plan to participate in a couple of upcoming guitar shows. The first, the California World Guitar Show, is on January 12 & 13, 2013 in San Rafael, CA. I've heard from several people that this is a big and well- respected show put on by the 4 Amigos, who pioneered the guitar shows which have grown in popularity since  the first one in 1978. Thanks to promoter, Larry Briggs of Strings West, for welcoming me in! I think they did a beautiful job on their poster. I'm inspired by the colors and might have to weave a strap........

And, then in February to March of 2014, I'll be involved with this super event right here in Santa Cruz, CA.
Santa Cruz is home to a surprising number of luthiers (guitar builders) and this art exhibit and festival will highlight some of them. You'll be hearing more about this one for sure as the time gets closer. In the meantime, if your curiosity is aroused, have a look at the event website with links to some of the luthiers' websites and prepare to be amazed!

All of these things, branding, logo, new website, new connections and entering into the culture of guitar players is very exciting!