A Custom Order - Gone Horribly Wrong and Then Right

I get a lot of requests for custom straps. Usually I know right away whether or not I can do what the customer is asking. Sometimes I need to mull it over for a while.
(You can see one of those examples here). With this particular request, I thought it would be easy, but  I was very much mistaken. The customer had sent me this graphic below. I admire the skill and wish I knew how to make something like this! It appeared to me just about as tiny as it is appearing to you and in this orientation. I noticed that there were numbers alongside the drawing, but ignored them. WHY? Because, as my husband the machinist pointed out later, I AM NOT used to customers sending me blueprints! I assumed that he was just recycling some other graphic. How could he know anything about inkle weaving and give me numbers that were useful, I reasoned.
They MUST be meaningless. Did I ask him. NO. WHY NOT? I kicked myself later.

Taken as it appears above, his drawing looked like a pattern draft to me and I thought it looked relatively simple. So, I said I could do it, quoted him a price and he sent the $ and hardware for the strap ends. This strap will replace the one on his  laptop bag.
I decided to do something that I don't usually do, use two wefts. One was thick and one was thin.
It was a bit of a pain, but I thought it looked more like the spacing in the drawing. 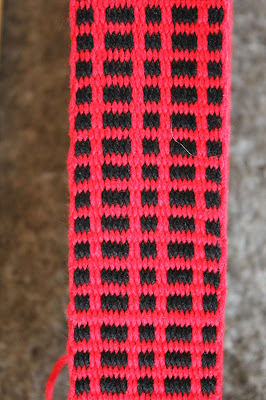 I sent him the photo above and that's when I learned how wrong I had been.
Of course, the numbers meant something! DUH! I needed to enlarge the drawing and turn it on it's side. You will see this below. I didn't give up then, oh no! I'm very stubborn. If you ever get me to say that I'll do something, know that I WILL. (My kids may have used this against me once or twice).

My next thought was MAYBE I could do a horizontal bar pickup. Tried it. Nope.
The floats were too long as I suspected. So, I added some turquoise stripes in the center, wove a random pickup pattern and created the guitar strap below. It's now for sale in my Etsy shop here. 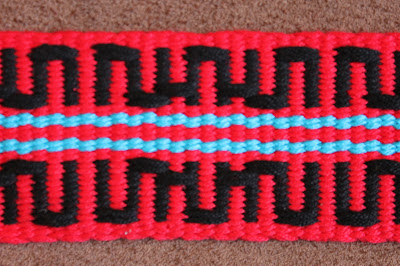 Attempt 3 took a lot of doing. Doubleweave was the answer. I did it one time in a class with Laverne Waddington. I didn't practice it after the class and it's been a few years.
I needed a refresher. So, what was I to do? Oh, I have notes from her class showing how to set it up on an inkle loom. Where was the book that the notes were in? My husband and daughter decided to help me look for it as I was sort of miserable by this point. Nowhere to be found. It took me two days to realize who I had loaned it to and two more to retrieve it. She met me half way in between her house and mine and we had a yummy lunch at The Hollar in Madrid. Still, I had a problem.  So, I enlisted my friend Kim Varland to help me. Kim teaches inkle weaving in Albuquerque at the Yarn Store at Nob Hill and has also studied Laverne's teachings via her blog. I spent a nice afternoon with Kim and she showed me the error of my ways. I had made a foolish mistake when warping. Laverne has a double weave tutorial here on her blog which shows how to set it up on the backstrap loom. She's currently working on a video specifically for inkle loom weavers. Hooray! 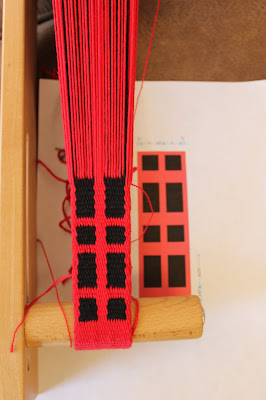 Okay! Finally, I'm getting it to work out! The weaving is looking like the drawing! 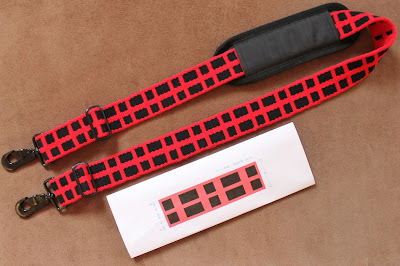 Here's the strap all finished with the customer's hardware installed. He was SO delighted with it when it arrived at his place that he decided to give me a tip. It was equal to twice what he had already paid. I am grateful to him for understanding that it was a difficult thing for me to accomplish the pattern and for paying extra for my efforts.

The two closeups below show a bit more, both front and back. I used the same yarn I use for most of my straps, (Omega Sinfonia) so it turned out to be nice and thick. Great for the intended purpose!
I missed a few threads on the backside and my edges were less than perfect.
But, I'm calling it a success. 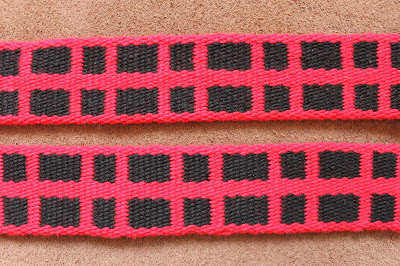 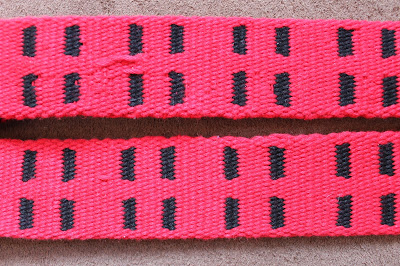