Although I own about a dozen inkle looms, it is the 5-6 Schacht looms that get constant use.


A couple of years ago, I became a Schacht dealer so that I can sell inkle looms to my students. Through that relationship, several very cool things have happened. When my book came out, I sent a copy to them for the company library and received a very nice email from Barry Schacht, founder of the company. He said "It's terrific", which pleased me greatly!

I was recently asked to write a piece for their monthly newsletter. Maybe you subscribe and saw it? If not, you can read it here: https://schachtspindle.com/newsletter-june-2020/
They asked me to talk about how I use color in my weaving, which is a BIG topic for me. Those of you who have seen my book know this, right?

It's great to have so many photos taken over so many years to share. I chose to include the ones below, because, in this instance, the color inspiration was direct and immediate. I follow Trujillo's Shoe Shop on Instagram. Marcos has an artistic eye and I enjoy his photos. He and his dad, Rey, have also done some fine repairs on my shoes and boots since I discovered them. 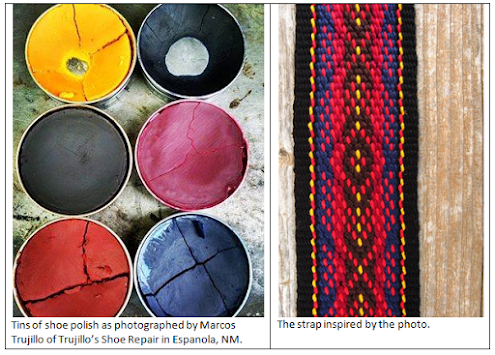 Even though my book has been out for more than a year, I still like flipping through it and looking at the illustrations. Of the 200 patterns charted there, some of them I had already woven and some of them I had not. This past week, I've used a few of them, changing them slightly according to the yarns I had on hand. Boy, that was fun! I'm trying out a new yarn, Knit Picks Curio #3. You can see it in the strap on the right, dark teal and turquoise. Other yarns that I used in the two straps include: Omega Sinfonia, Tahki Cotton Classic, Gedifra St. Tropez, and Red Heart Fashion Crochet Thread #3.

For the strap shown below, I used wool. The blue and gray do not have a lot of contrast, and the fuzziness of the wool makes the pattern less distinct. But, I like it that way. 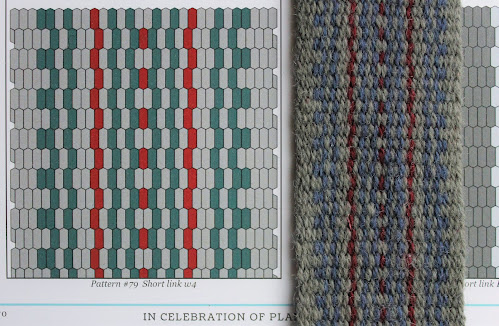