I like telling my customers that they have a one-of-a-kind woven piece.
With the guitar straps, my main focus, they are woven one at a time, so that's easy.
But, right now I'm making a collection of hatbands.
If I put a long warp on the loom, I can get 3 hatbands out of it.
Then I asked myself, how can I make each one different?
If I am using plain weave only, what are my options?
My answer: add warp threads, subtract warp threads, change the color of the weft.
In this series, I tried all three of the above. (To see detail click on photos to enlarge them.) 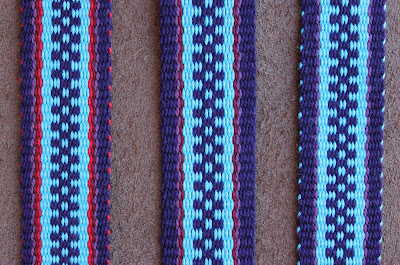 When I warped the loom initially, I used 5 colors: dark purple, red-violet, burgundy, red and turquoise. The borders are purple, so by using red as a weft it showed up nicely as red dots along the border. (At left in photo).
After weaving the first 34" I made the following changes: cut and removed the 4 red warps, added in 4 more purple warps at the outside edges, and changed the weft to purple so it blended in with the borders. (Center band in photo)
For the 3rd variation, I cut and removed the 4 burgundy warps and changed the weft to turquoise.
(At right in photo)
I'm satisfied that each one of the bands has its own character; each is just a bit different than the others. 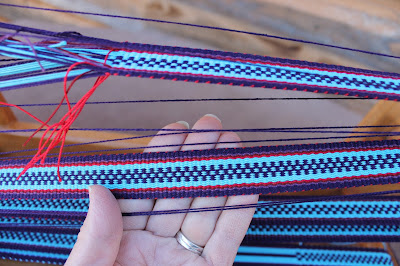 All of these changes were simple to make as I went along. In this photo you can see what happened when I added warps. I ran them in the same path as the original warp and they just sat alongside the section that was already woven. No problem.


Below are two more examples. In these experiments, I used a medium length warp and only got two bands on each. 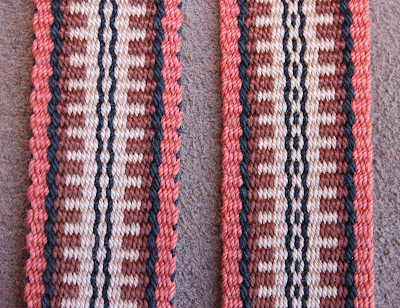 At left is the first band on this warp. I wove it with a contrasting black weft. For the second band, shown at right, I added two warps in the center, a tan and a black. This changed the design from a simple pair of black stripes to a tan chain within the black stripes.
I also changed the weft from black to rust. 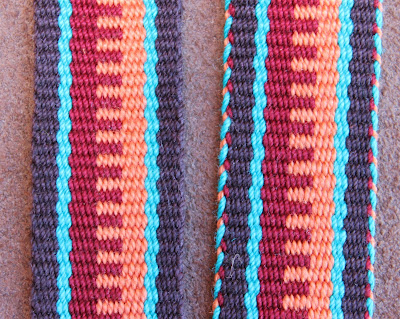 At left is the first band woven on this warp. For the second band, shown at right, I added to each border one burgundy and one turquoise warp and switched the weft to orange.