After our short and sweet visit in Shady Cove, we came up with a return trip plan that included trying to see Crater Lake, only an hour away. Rick had told me that his father went there twice but never actually saw the lake due to fog. Since he has now passed on, the quest has carried to the next generation. We first called the folks at Crater Lake National Park who told us that the visibility was good, but storms were expected. As we drove up the long and winding road, the suspense was palpable. The higher we climbed, the foggier it became. 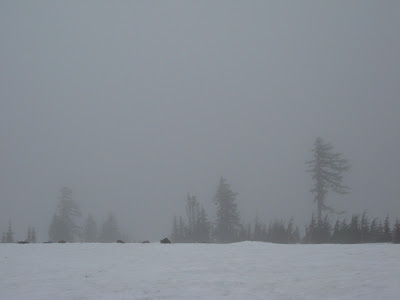 Alas, it was cold, windy and FOGGY at the top. Can you tell that there's a lake out there? No, neither could we. After reading the parks website, I have now learned that the lake is only visible 50% of the time in the winter AND they have webcams on their site, so you can take a peek first. We'll just have to go back. 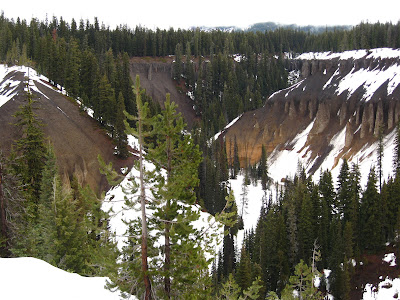 As we drove out of the park, the scenery was pretty spectacular, though! 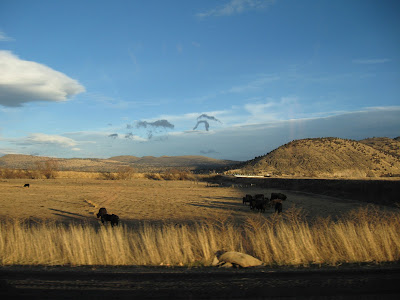 Then the long meander on the Volcanic Legacy Scenic Byway continued in a southerly direction through the rolling hills of southern Oregon. This dark grey horseshoe cloud was one of the most amazing clouds either one of us had seen.

Next stop, we decided, was the Lava Beds National Monument. By the time we reached it, the sun was setting. We walked for a short distance along the trail at Petroglyph Point which was intriguing. The area surrounding us was lovely at this time of day. We were inside a ring of fire with volcanic mountains all around. Worth further exploration, we concluded and set off to find a nearby place to lodge for the night.
Nothing! It was too cold to sleep in the back of the truck, so we pressed on to Alturas for dinner and a motel.
We'll just have to go back.
As soon as it was light we set out again with a revised plan. Pulling out of the motel parking lot, we stopped to let a whole herd of deer (dozen or more) cross the road in front of us.

We ate wild rice pancakes at the Fall River Hotel in Fall River Mills and even purchased a packet of the mix to take home! Yummy! Wild rice is an abundant crop in this area of California and you can see beautiful photos here.
McArthur-Burney Falls State Park proved to be the perfect place for an afternoon walk. The color of the water is amazing!!! Watch the video and it will be just like you were there with us. The trail along Burney creek led us to Britton Lake where we had the company of a pair of bald eagles. Win!

Rolling on along, heading for Lassen Volcanic National Park, we read that there were lava tubes that you can walk through. That went directly onto the bucket list!  Wait! WHAT?? The road sign tells us that the park is closed during this time of year. We'll just have to go back.


We were on the last leg of our journey home, but not in any hurry, so we stayed on back roads. Just before sundown on Hwy 99 we had to pull over to watch the flocks of geese and swans that were filling the sky above us and fields around us. There were so many! They were high and low, near and far. You can hear the geese in this video. Sorry about the sounds of traffic on the highway.  Another magic moment among many.