A delightful discovery on Weavolution recently led me to uncover this tradition of sash weaving in Ireland and make some new friends across the seas.  Niamh Dempsey Trua, of County Leitrim had posted a photo of one of her woven sashes, known in Ireland as a crios.  Niamh says  "While researching Irish costume I came across numerous intriguing references to the Irish crios. I became determined to find someone who still practiced this age-old skill and would teach me how to make one. I soon discovered that crios-making was on its last legs, a traditional craft dying out rapidly in this industrial age of mass production which makes it so difficult for time-honoured crafts to survive. Unfortunately the crios is not worn by the Aran Island men any more but they were the last to wear it. It was part of the Irish costume until the 16th century when Irish- style costume was outlawed in Ireland by British rule!" 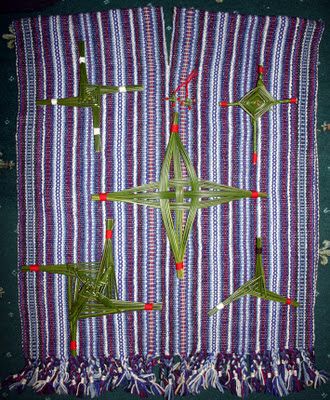 Many criosa joined by Niamh into a poncho. 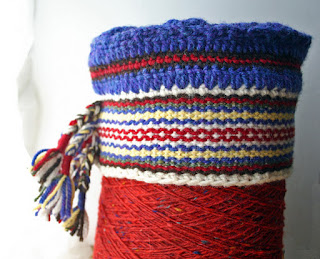 This hat incorporates a crios for a band at the bottom, and Niamh has crocheted the top.
I  love the combination of the two techniques!
Shortly after this discovery, I found an article in Ashford's magazine, "The Wheel", about another Irish weaver, Mairead Sharry. Mairead teaches classes in Traditional skills, spinning, weaving, dyeing, crochet, knitting , felting, pampootie making and rush basketmaking. She is from Inisheer, the smallest of the Aran Islands, in Galway Bay.  She has two blogs with very interesting photos. Look here for spinning, feltmaking and other things.  And here for basketmaking. 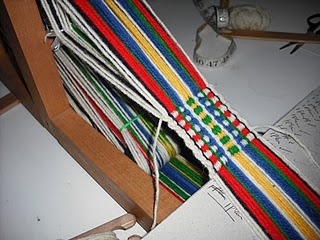 Crios on the Loom 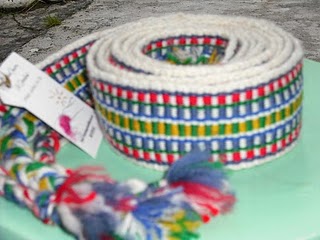 Crios Finished
These criosa are rather traditional in color and pattern. Many colors can be used, most common are primary colors with white along the borders. They are warp-faced and can be woven on different types of looms.
While the above photo shows Mairead's sash on an inkle loom, Niamh uses a wooden rigid heddle with the warp tied to her waist on one end and a fixed object on the other. 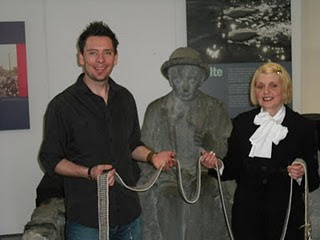 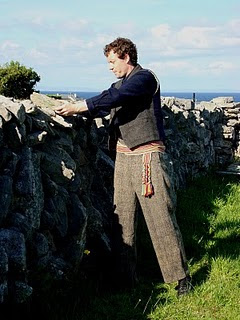 Mairead's son, Martin, wearing traditional Aran Island  men's costume with a crios.
I've invited  Niamh to share information and more about a traditional use for the crios.
Look for this in the next post.