Because I'm concentrating on the Baltic pickup technique, I had a look at my library and have found Susan Foulkes' book, "Weaving Patterned Bands" to be an absolute treasure. I learned a few things by reading my way through it that I didn't know before, although I've been using the technique for many years. I highly recommend it!

In the previous post, HERE, I showed two bands. In this post, I'll be looking again at the design from    Band A. It's a simple zig-zag design woven in Baltic pickup using 9 pattern threads.

For today's example, the warping draft is given below in two different formats.
It shows 9 black pattern threads with a turquoise border and background, 37 warps in all.

In the first draft, the shape of the colored cells look much like the way threads do in a woven band. With it, you can visualize what your band might look like.

The warping draft tells you how to warp your loom. For a plain weave band, it's all you need! Just warp and weave to get your pattern. Plain weave can be awesome with an exciting combination of warp colors in the right order. I wrote a whole book about it which you can find HERE.

Pickup patterns add another extra level of design possibilities. Undoubtedly, you have seen beautiful examples. For a pickup design, you will also need a pattern draft, showing you which threads to pick up (and/or drop) to weave a given pattern motif. Baltic patterns are created on a warp where speckles of one color are contrasted against a background of another. Traditionally, the pattern warps are doubled (two strands used as one) or a thicker pattern thread is used to make the design stand out from the background. In my weaving, I often ignore this rule. This would be frowned upon by traditional weavers, I think, but it works for me with most of the common yarns that I use, primarily Omega Sinfonia. After the bands are cut from the loom, I soak them in plain water for at least a couple of hours. This helps the design stand out better.

For this post, my samples were woven using cotton Sugar 'n Cream yarn and the pattern threads were not doubled. The finished band measured 1 3/8" wide.

Illustrated below are:
A) At left is a photo of the woven band.
B) In the center is a pattern draft (TYPE B) made using the Band Weaving Pattern Editor, V1. It shows all 37 threads (background, pattern and borders) as well as the pickup pattern.
C) At right is a typical pattern draft (TYPE C) for Baltic pickup. It does not show the border threads or background threads, only the pattern threads and pickup pattern. This one was created using the Band Weaving Pattern Editor V2.  Just about every source you will find for Baltic patterns uses this grid format. Details for reading this pattern draft were given in the previous post.

Although this method is called "pickup" because you literally pick up threads out of their normal woven sequence, many (most) patterns require you to also drop threads. Look at the examples below.
Shown, left to right are:
1) Picking only to create the pattern. This is the same as the photo and drafts above. In between the black < and > zig-zag lines, you see black speckles meandering along the center.
2) Picking and dropping. Notice in the center of the black < and > zig-zag lines the black speckles are not there. These warp threads have been dropped and if you look closely, you can see the turquoise weft showing through in those spots.
3) Picking and even more dropping. As in the previous example, the warps in the center of the black < and > zig-zag lines are dropped, but also warps have been dropped along both sides. Look again at #2 and notice that on the outside of the < and > there are 3 black speckles. Now they are gone and there are no black speckles are showing at all.
4) This one is the same as #2, but the weft is now white. Do you see where it shows through? Is it more noticeable than when the weft was turquoise and matched the background? The simple act of using a contrasting weft color can add a lot of interest to the design overall.
5) Same as #4 with a finer white weft. It's harder to see the weft showing and the whole pattern is a bit more compressed because the rows pack tighter with a thinner weft. 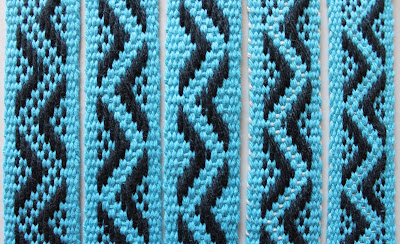 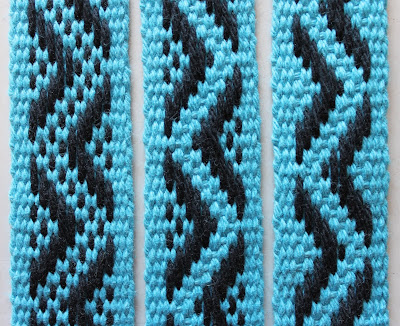 
Below is a closeup look for a comparison of bands 3, 4, and 5. Notice the effect that using different wefts has on the look of the band. (Click photo to enlarge). 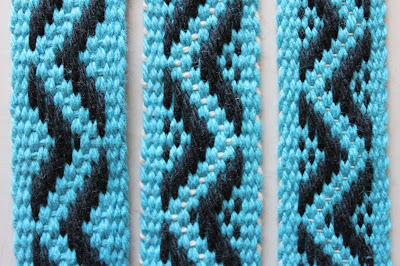 
Below are two sets of pattern drafts which correspond to the photos above labeled 1, 2, 3.
I'm going to call these drafts TYPE B and C.

First, the TYPE B draft that shows ALL threads including borders and background. 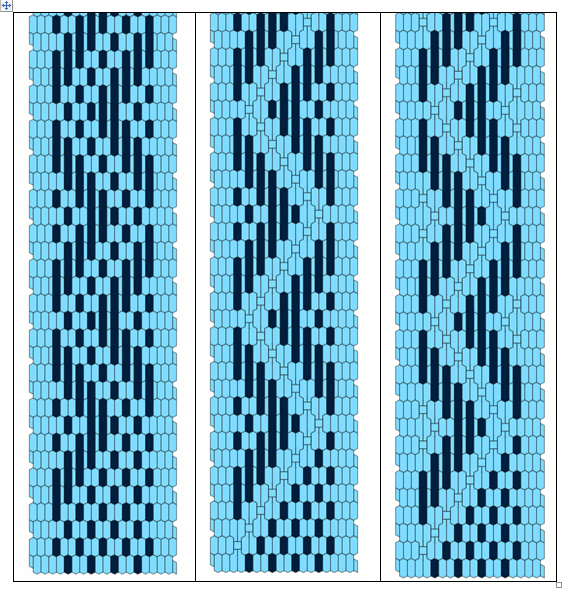 
And, the TYPE C (or traditional grid) pattern drafts for these same 3 versions. 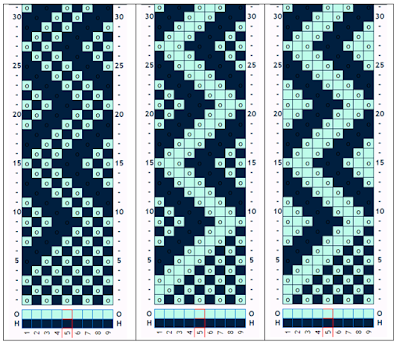 
Please leave a comment to let me know what you found helpful and what left you wanting more information.

Which type of draft did you like better? Grid chart (Type C) or the one which shows the background and borders also (Type B) ?


In the next blog post, I'll describe how to use the Pattern Editor to create your own charts and talk more about Type B drafts. (Type C drafts were described in the last post.)