On Sunday, March 11th at 5PM, San Jose, CA public TV Channel 15 you can see the half hour show called "Darlene Carman Presents". Darlene and her husband Doug host this show two times a month and like to invite creative types to interview. After seeing me weaving at several outdoor craft fairs they asked if I'd like to be on the show. I said yes, but was slightly terrified.


You can find out the answers to these questions and more:
Did you learn how to weave from other members in your family?
What is the most unusual material that you have worked with?
Do the patterns have symbols or meanings embedded or are they primarily colorful designs?
If you aren't in the area or able to watch, I will post a link later so that anyone can watch it online, just as soon as I figure out how to do that. 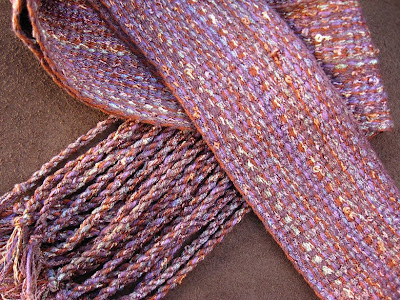 My darling husband went along to carry stuff and offer moral support. There were 4 looms and lots of samples. While being interviewed, I got some part of this scarf done. It is made of bamboo and rayon in a fantastic combination of colors; it is called the "Copper Sunset Scarf".

The thing that got the most interest from cast and crew was this pair of my old hiking boots
with handwoven shoelaces. They are cool.
We got to sit in the control room and watch the producer, Gopher Gold, at work on the show being filmed before mine. There was so much creative energy in that room that it was overwhelming! It was amazing to watch this clever fellow at work. It just added to my stage fright though, so I had to leave after a while.
The following testimonial is from my dad, who received in the mail a copy of the show on DVD. He's an honest man, so you should take his word for it.
"We watched your TV interview last nite and thought it was great. I'd give you an A+ ...
You didn't use any  uh's um's er's or unnecessary crap. I was really impressed. The interviewers asked the right questions, I thought, but the cameraman should have gotten a lot more closeups to show your pattern details off - like the trailer did. The monarch pattern is very good ."
Thanks, Dad.