There is a band that plays daily in Old Town Albuquerque; they are called Amauta.
Originally from Ecuador, they formed the group in 1990 with the mission of preserving and promoting Ecuadorean and Latin American folkloric music. The word "amauta" is a native Quechua word that means instructor or teacher. "Our motto is the people that do not keep their customs and traditions do not know their history nor their destiny."
I've stopped to listen to them play on several occasions, totally drawn in by the sound of the flutes and panpipes, which they have in an amazing assortment of sizes. One member of the band also plays guitar and I noticed the plain strap he was wearing. One day, I decided to ask if he would be interested in trading CD's for a new guitar strap. He said yes!

Hernan told me that his favorite color is green. In my last blog post, I showed several green straps that I wove in order to give him choices. I think he chose the best one.

I'm super happy with the trade and have been listening to their music all week.
They have recorded a mix of traditional South American music, along with versions of popular songs from artists we all know and love.
I think their version of  the Beatles "Let it Be" is very pretty. 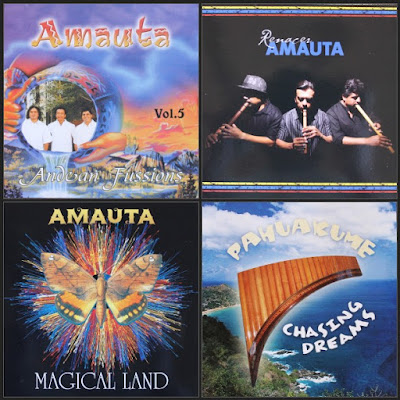 This album cover inspired a new pattern.  (The strap is for sale here in my Etsy shop:
https://www.etsy.com/listing/249788638/guitar-strap-for-acoustic-guitar?ref=shop_home_active_1) 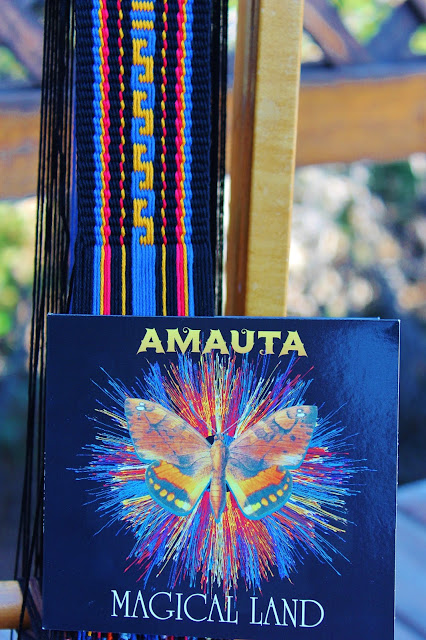 Just to give you a little taste of their music, I'll share this video taken in Old Town by one of the many tourists who, like me,  have been mesmerized by the music and stopped to sit a spell and listen.


Or check them out here on MySpace: https://myspace.com/amautaecu