Weaving Letters on an Inkle Band

There are several ways to weave letters in a warp-faced band. The method described here is
relatively easy to understand, simple to set up, and it produces pretty crisp letters.
It is my favorite so far. It is woven on the horizontal bar threading. 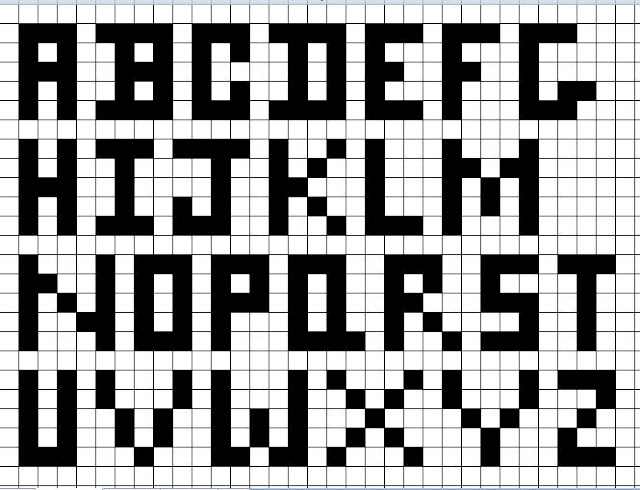 The letter chart illustrates how each letter is made up of blocks. Each block represents 3 warp threads. Each letter is 5 blocks (or fifteen threads) tall.
Most letters are 3 blocks (shed rows) wide, although letters with diagonal lines and a few others will take 4-5 blocks (sheds) to complete.

The letters will run horizontally along the woven band as in the photos below.
All comments to follow will refer to this brown and turquoise band.
The 15 turquoise threads which form the letters were warped through the heddles and the 15 brown ones which form the background were open.

Here is the diagram for warping the band pictured:

A big advantage of the horizontal bar threading is that many of the letters have a straight upright which is naturally formed in the shed row where the turquoise threads are on the top layer.
When not needed as part of the letter, you must drop the turquoise out of the way (to the bottom layer) and pick up the brown from below. Think of the threads in pairs; consider a brown thread and a turquoise thread which are next to each other as a pair. So, whenever you drop a turquoise thread, you must pick up its corresponding brown thread (the one just to its right) from below. Conversely, when you need to pick up a turquoise from the bottom layer, you must drop its corresponding brown thread. 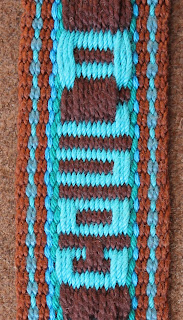 The letter C is formed in 3 sheds by the following steps:

In this video, I demonstrate the technique by showing you how to weave a couple of letters.


If you would like to purchase a copy of this blog post, formatted in a document so that you can easily print it out, you will find it here in my Etsy shop: www.etsy.com/shop/ASpinnerWeaver